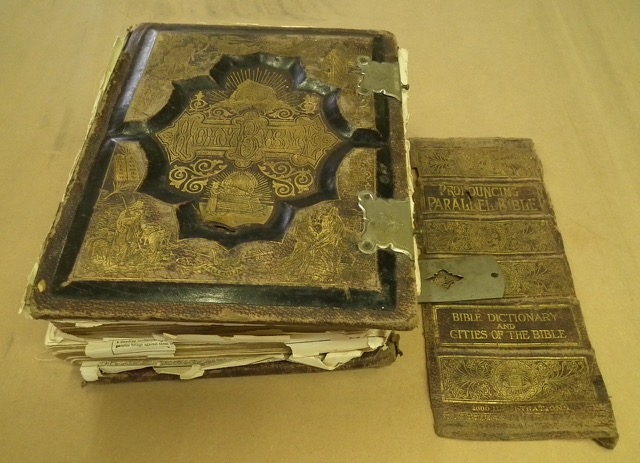 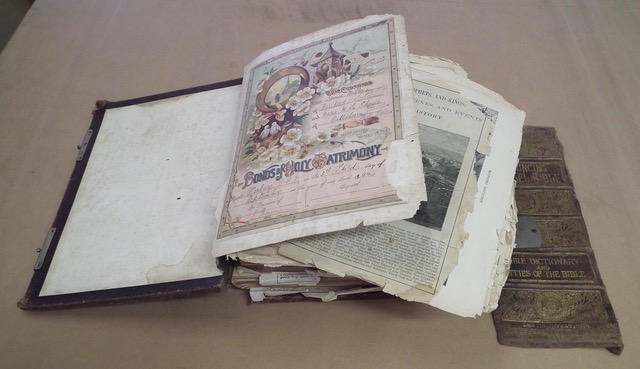 Pre-conservation Condition of the bible: The bible was bound in full leather with relief detail and elaborate gold tooling on both the front and back cover boards. It was hand-stitched onto sunk cords. Alloyed metal clasps are pinned to the foredge side of the front and back boards. The top staple is currently missing. The book has been damaged due to its age and continuous use. The cover boards are made up of two cardboard sheets pasted together to achieve the thickness used for the relief work. The leather cover is badly damaged along the spine piece, which has split off the cover boards completely along the spine edges. Red-rot has set into the leather causing this to become brittle and weak. The glued spine of the book-block has dried out and the bone-glue has chipped off leaving the book-block loose. The head and tail bands were hand-stitched but but have disappeared completely. A large number of sections throughout the book-block have become detached from the cords as a result of the binding thread tearing, causing those sections to protrude from the book block. The edges of the pages of these sections are badly torn and creased. Extensive dog-ear damage is evident. The paper of the book is acidic. The acidity has led to some discolouration of the pages and the embrittlement of the paper fibres and therefore weakening the paper. Foxing stains are present in the front of the book. Extensive surface soiling has taken place. 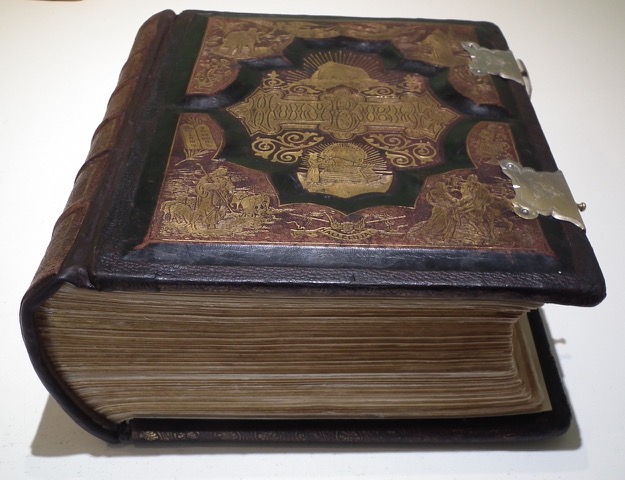 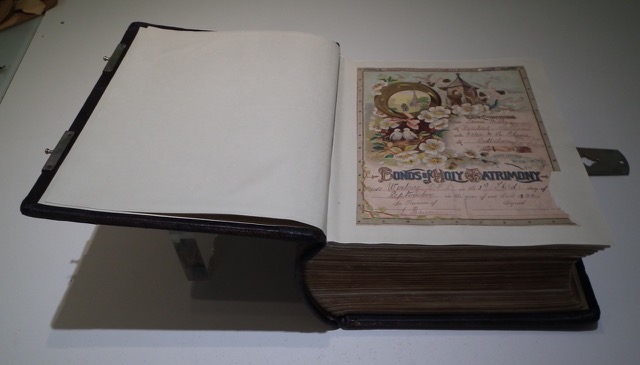 Conservation Treatment performed:
The book was collated and misplaced pages were placed in the correct order; the book-was dry-surface cleaned with squirrel-hair brushes of all surface dust and debris to prevent any abrasion of the paper; damaged pages were repaired by traditional paper repair methods using Japanese lens tissue; the repaired pages were pressed between felts until completely dry and flat; folded sections of the repaired pages were formed and placed in their correct positions; new archival end-papers were inserted; the spine was lined with new mull and the repaired sections were sewn onto the new mull; the spine was reglued; new hand-stitched head and tail bands sewn to the spine; all necessary spine linings were adhered to the repaired spine; a new leather spine using new calf-leather as glued over the spine lining and the ends along the spine hinges were fitted under the existing cover leather; the book-block was rehung into the cover; acid-free paste-downs were adhered to the inner wooden covers, back and front; the original leather spine piece was glued down onto the new spine; a leather dressing was applied to the entire leather cover to feed the leather and combat red-rot; finally the book was weiged down until dry and set. 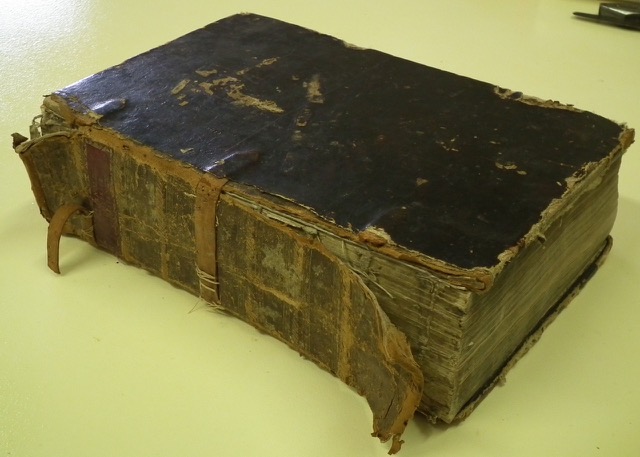 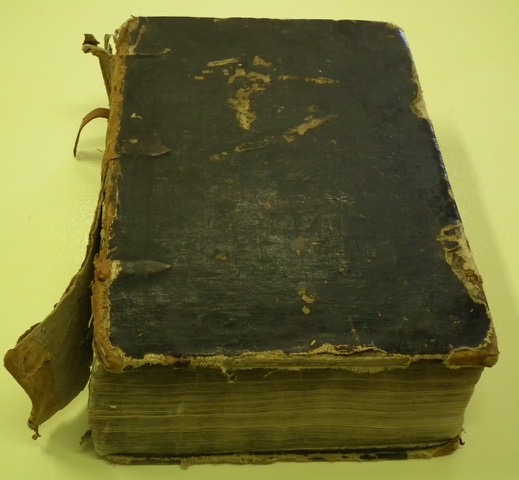 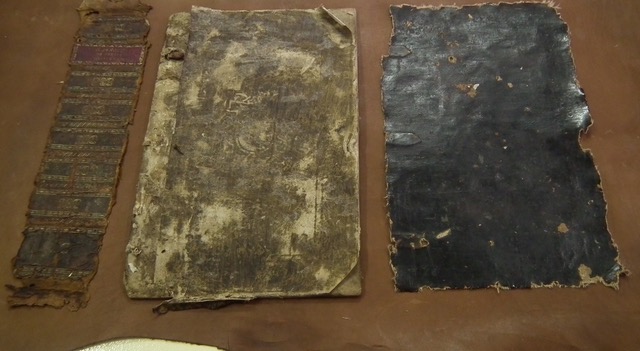 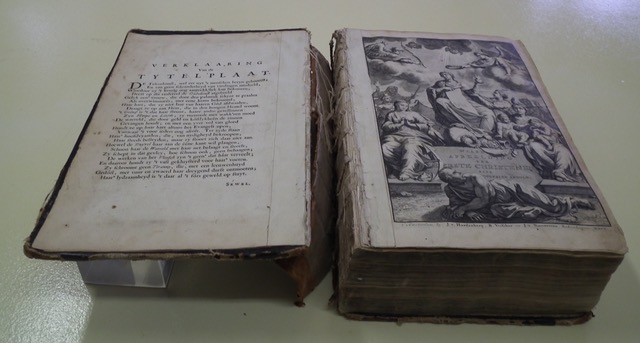 Pre-conservation Condition of the bible: The book was made up of sections sewn onto raised cords . Hand-stitched head and tail bands adorned the binding but the tail band is missing. The head band has become detached from the binding. The leather cover has survived many years of use and has become extensively scuffed on the front and back cover boards, worn through along the edges of the boards and sheared along the spine along the hinges on the front and back of the spine. Three leather strips have been attached over the spine and underlayed under the cover leather along the spine edge. The bottom strip is missing. The leather has dried out and red rot has set in. The stitching of the first number of sections has come undone and these sections are now loose. The end-leaves are sheared along the hinge gutter. The adhesive on the spine of the book has dried out and therefore the sections of the binding are displaced causing a number of protrusions on the fore-edge. There is extensive surface dirt in the book-block. The print medium used is stable. Date: 1700 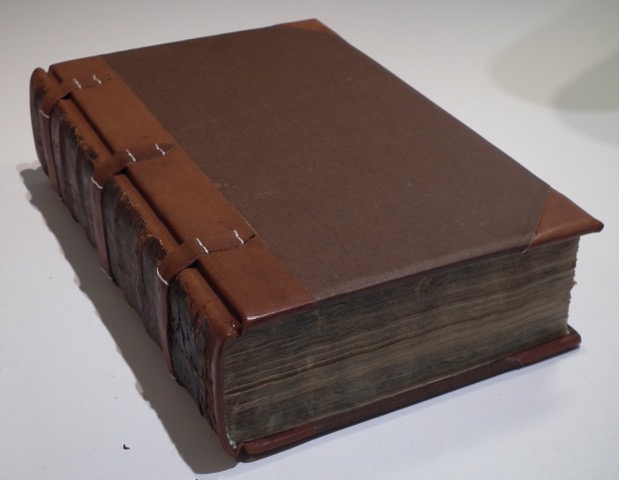 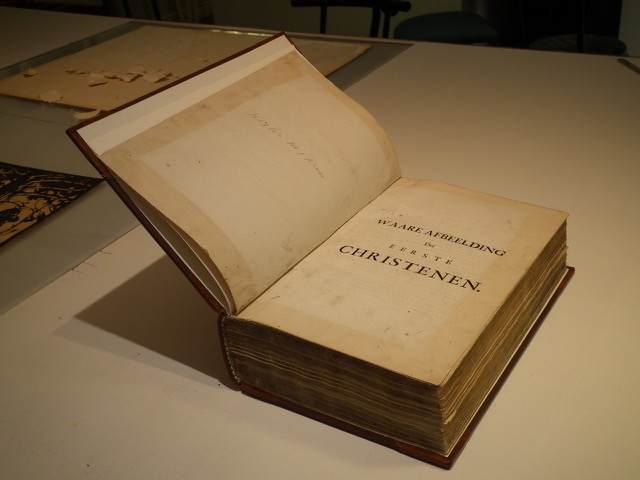 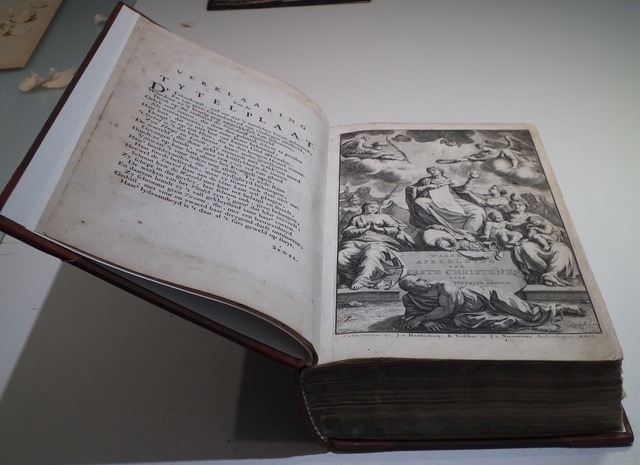 Conservation Treatment performed: The first number of pages were numbered; dry-surface cleaning of the book-block of all surface dirt was performed; the entire existing leather spine piece was removed as well as that on the cover boards; loose sections were repositioned correctly in the book-block to form an even fore-edge; new mull was applied to the spine; the spine was reglued the loose sections were restitched onto the existing cords and new mull; the top head band was resewn to the top of the spine and a new tail band was sewn to the bottom of the spine of the book; an Oxford Hollow was glued to the spine and a new spine lining card was then attached; a new matching leather spine piece covered the repaired spine and was pasted down onto the existing cover boards; the book-block was rehung into the newly covered book-cover; the existing leather was pared thinly and then pasted down onto the new leather cover and spine piece; existing leather spine strips and one new one were stitched to the spine to resemble the original method; the end-leaves of the book-block were repaired with Japanese Tissue strips applied along the inner hinges; end-leaves were laid down onto the inside of the cover boards; the book was pressed until completely dry and set. 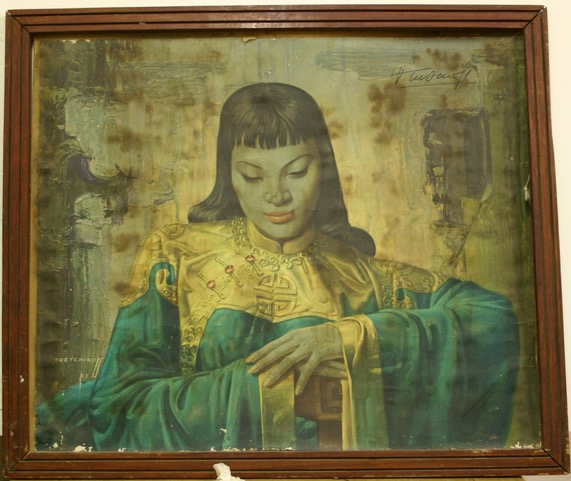 Pre-conservation Condition of artwork: The artwork was pasted down onto an acidic Masonite backing board. Due to acid migration from this backing board, the artwork paper was severely discoloured, foxing stains were present. Adhesive staining also was evident. The artwork has been varnished with a paper varnish. Scuffing along the edges of the artwork was present caused by incorrect framing techniques. 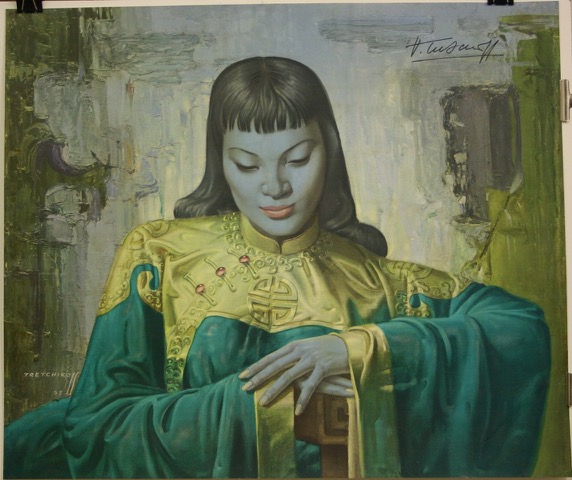 Conservation Treatment performed: All neccesary pre-conservation tests such as colour stability, PH levels, paper fibre strength and adhesive tests were preformed. The Masonite backing board was peeled away from the back of the artwork layer by layer; the final layer was released with an appropriate solvent and then peeled away without skinning the paper; the artwork was then chemcially cleaned from the back of the artwork repeatedly until as much of the staining as spossible was eliminated; after chemical cleaning the artwork was de-acidified and then resized with archival Methyl-cellulose paste to strengthen the fibres; it was lined with acid-free Japanese Tissue to reinforce the paper before pressing between felts until completely dry and flat; finally, missing pigment areas were retouched with matching pigments.

Pre-conservation Condition of artwork: The artwork was completey laid down onto a wooden backing board. It was painted in watercolour on Chinese Tissue paper. A silk brocade border was pasted to the edges of the artwork. Due to long term acid migration from the backing board, the artwork paper was severely discoloured and extremely brittle. Numerous tears were present across the artwork and some paper areas were missing. The artwork was lined a number of times with layers of tissue paper. 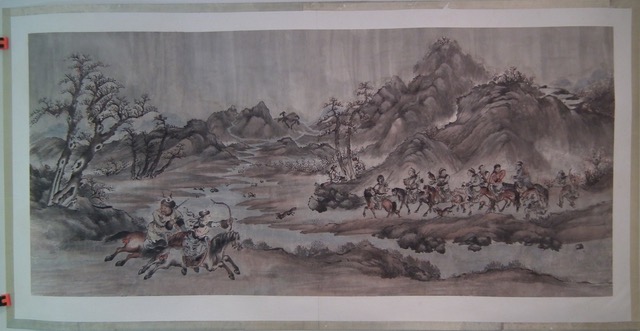 ‘Portrait of a Lady’ Photographer unknown 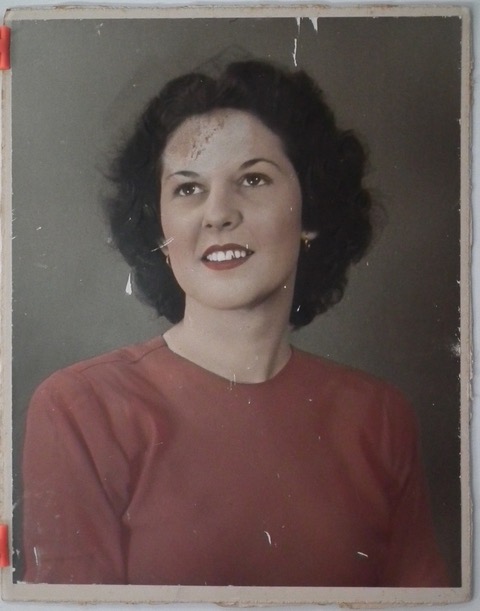 Pre-conservation Condition of artwork: The photograph was adhered to an acidic secondary support card using heat-set tissue. Due to poor storage the emulsion of the image was scratched in anumber of areas. Exposure to insects resulted in some areas of the emulsion to be eaten away. The acidity of the secondary support card caused the primaryt siupport papewr to be come acidic and weak and causing stains to appear in the image. 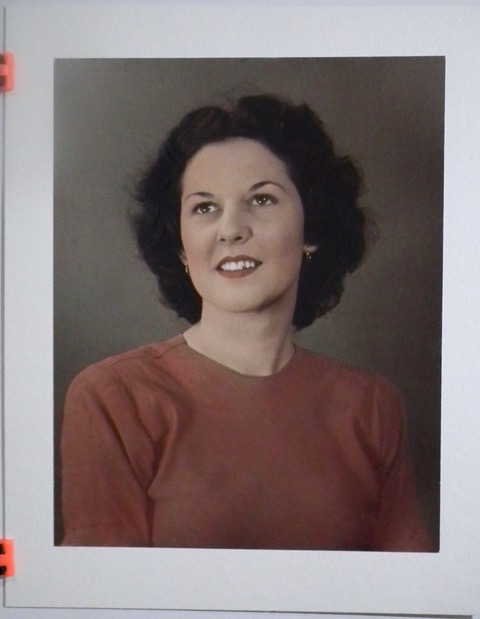 Conservation Treatment performed: All neccesary pre-conservation tests such as PH levels, paper fibre strength and adhesive tests were preformed; the photograph was removed from its secondary support card by using an appropriate solvent to release the heat-set tissue and progressively peel it away from the verso of the print; The photograph was dry-surface cleaned front and back using cotton wool swabs; the print was then aqueously washed to eliminate undersirable acid content; after washing, the photograph was allowed to dry between acid-free blotters and then weighed down between acid-free boards until completely dry and flat; finally it was mounted to a new, acid-free secondary support card using archival starch paste; It was then weighed down agin until set.

Various archival enclosures such as slip-cases for books, archival polyester sleeves for conserved artworks and acid-free clam-shell boxes are made at DK Conservators on demand.

Clam-shell box for a collection of original calligraphy documents: 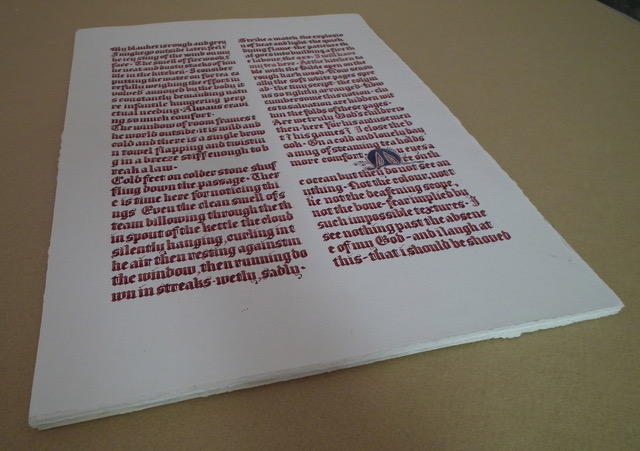 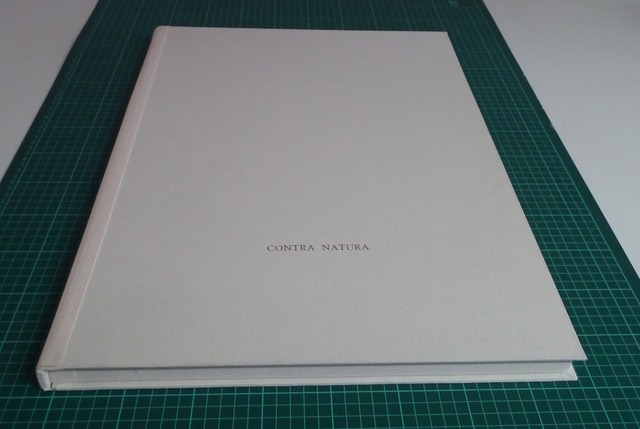 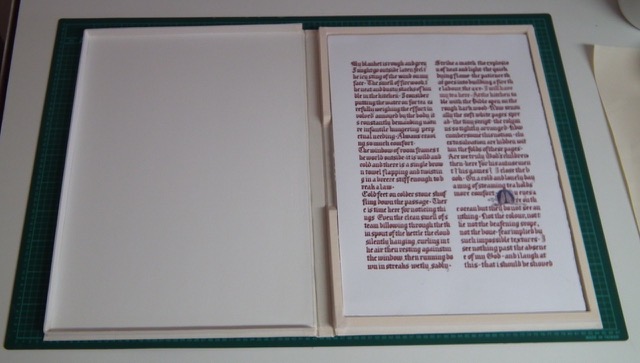 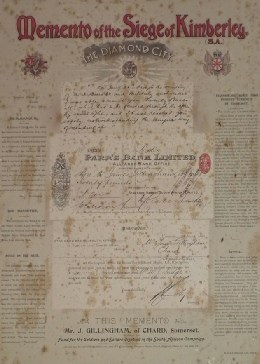 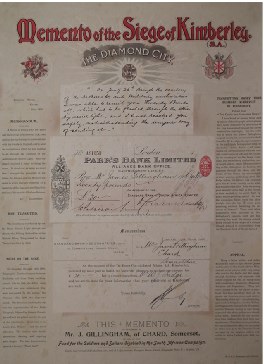