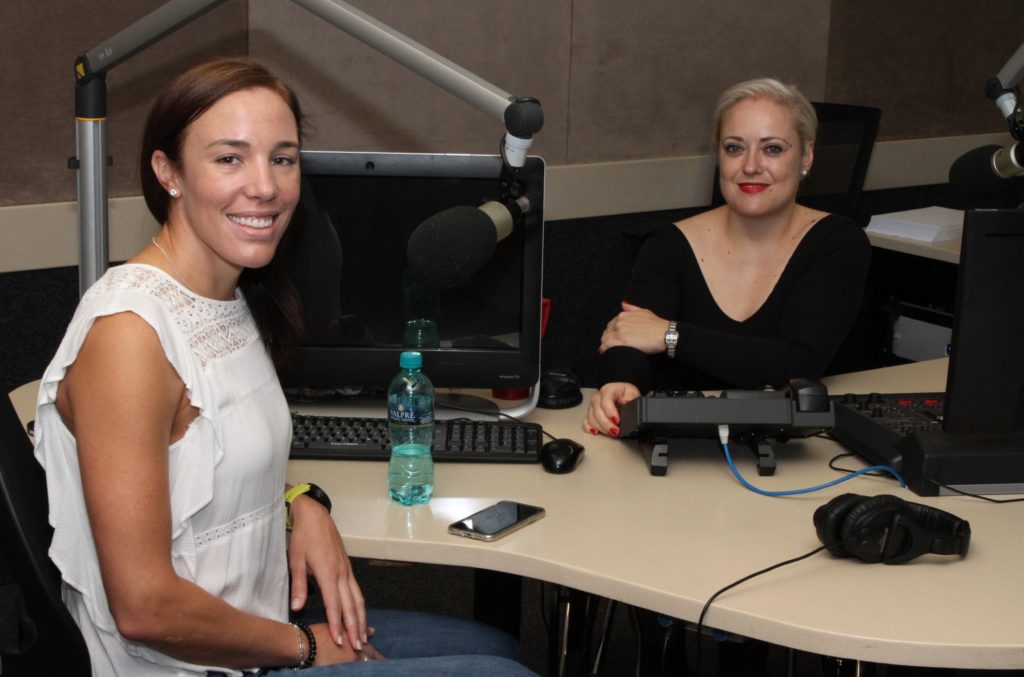 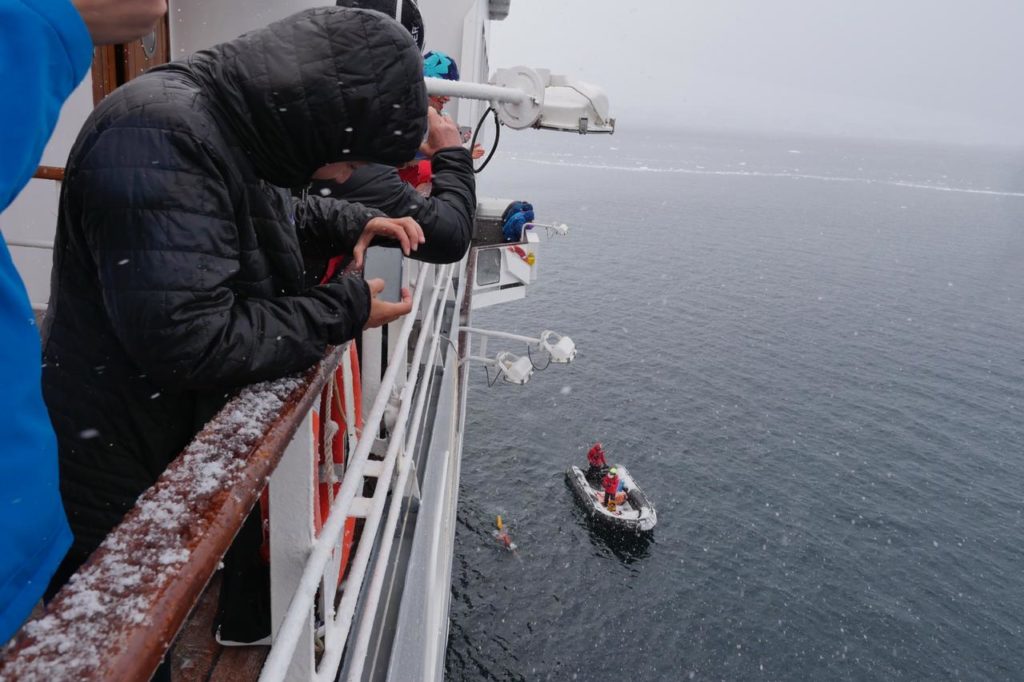 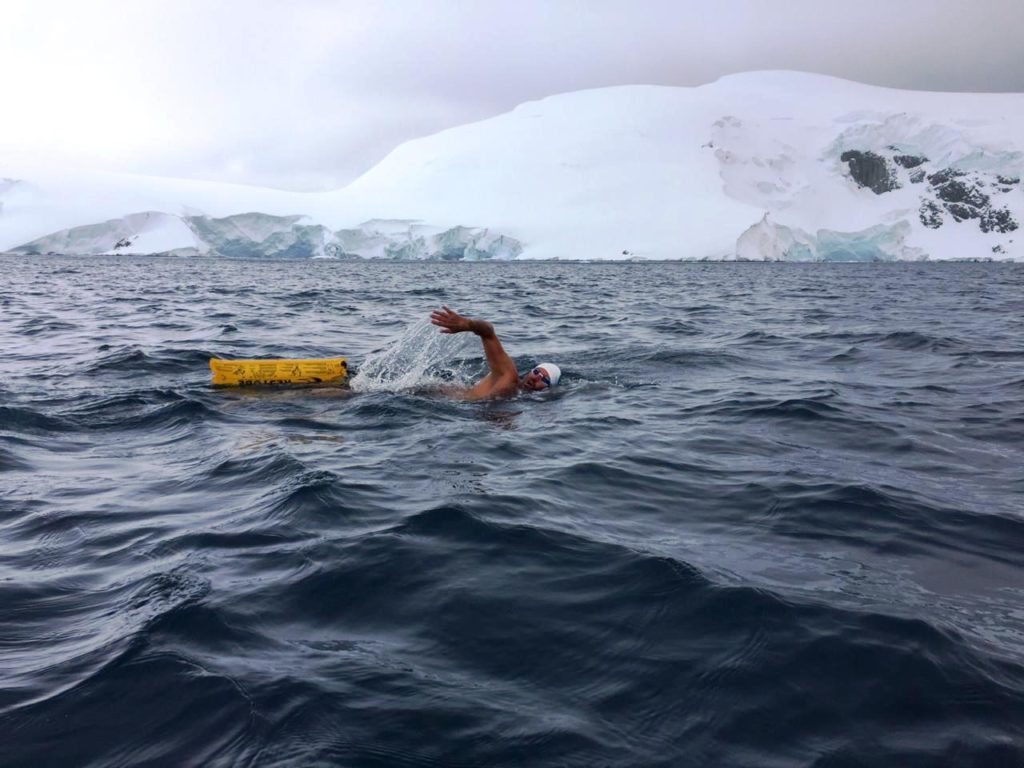 On 25 November, 00:15 South Africa time, the gruelling wait was over. Ram Barkai of South Africa successfully led 14 ice swimmers from across the globe to complete the first official 1km ice-swim at the bottom of the earth.

While others pack their thickest jackets to visit the South Pole, these ice-swimmers appeared in Speedo’s on rubber ducks alongside the OneOcean expedition cruiser, RCSG, to swim in -1.4 Deg C waters.

Waiting upon a weather gap that would allow the swim was of the hardest challenges they experienced. The weather changed constantly and interrupted the event, which really tested swimmers’ psychological endurance. 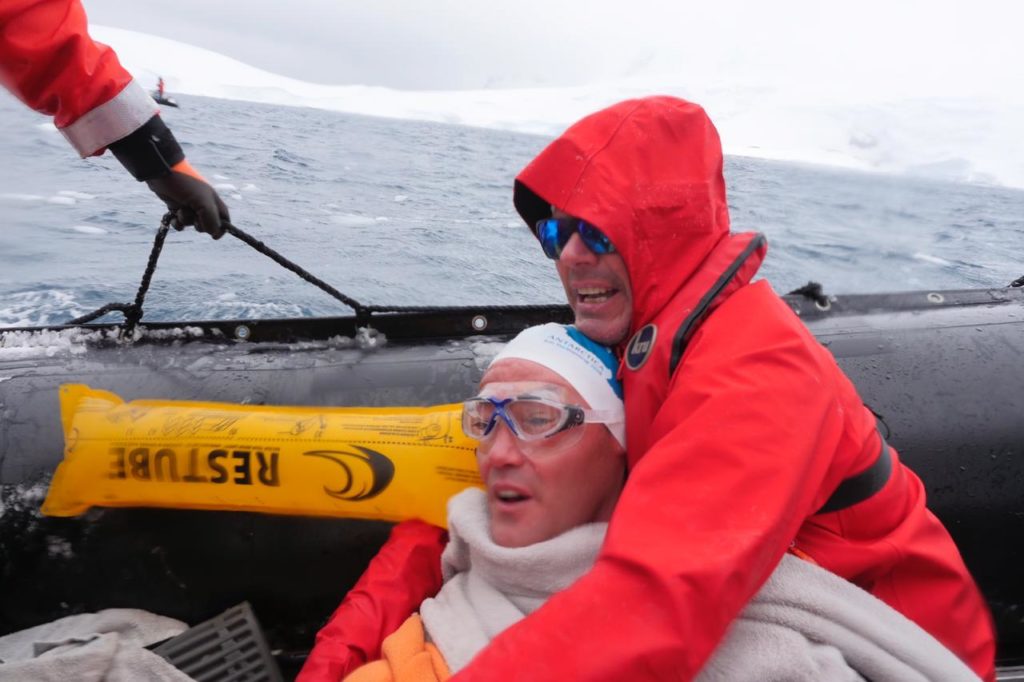 A test swim was done on 22 November after which expedition leader Ram settled on a location, Port Lockroy, a natural harbour in front of the Antarctic Peninsula, to do the official swim. The strategy involved heats of 3 or 4 swimmers per heat who were accompanied by support and rescue staff in rubber ducks.

After the first 2 successful heats comprising 7 swimmers, currents and wind started to create havoc and boat management had to pull up anchor to sail to the next possible swimming location, Mikkelson Bay, trusting weather will allow the remaining 7 swimmers to complete the swim. 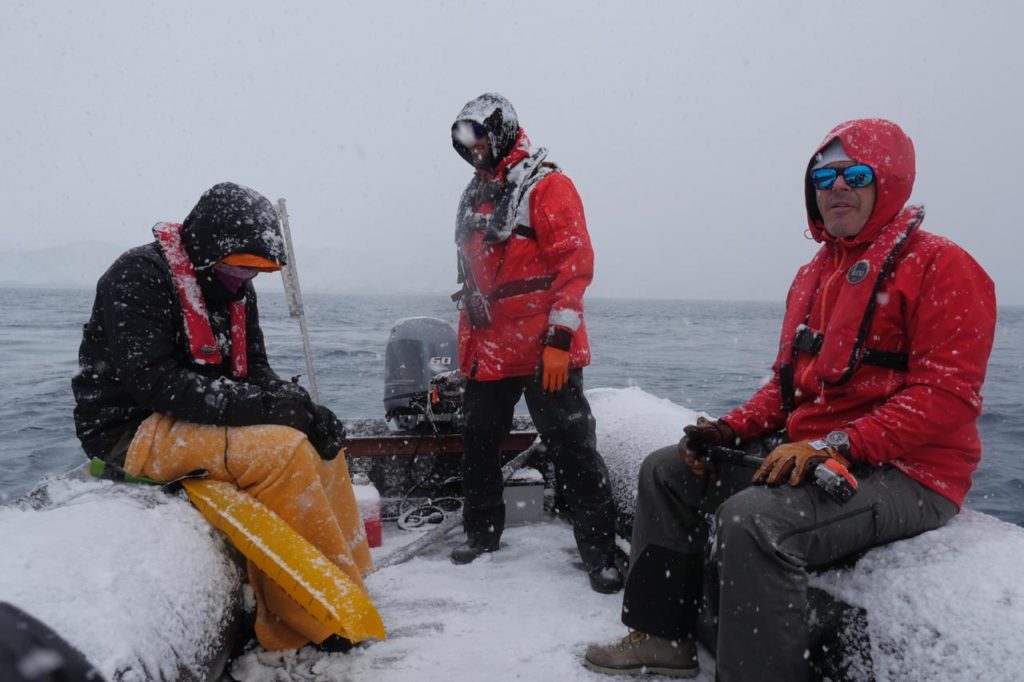 At Mikkelson Bay they were left with a very narrow weather window and decided to combine heat 3 and 4 – their only chance to get all swimmers through. The very last swimmer to enter the water was expedition leader Ram Barkai who again had to wait a gruelling while for a weather gap before he could successfully complete the swim. 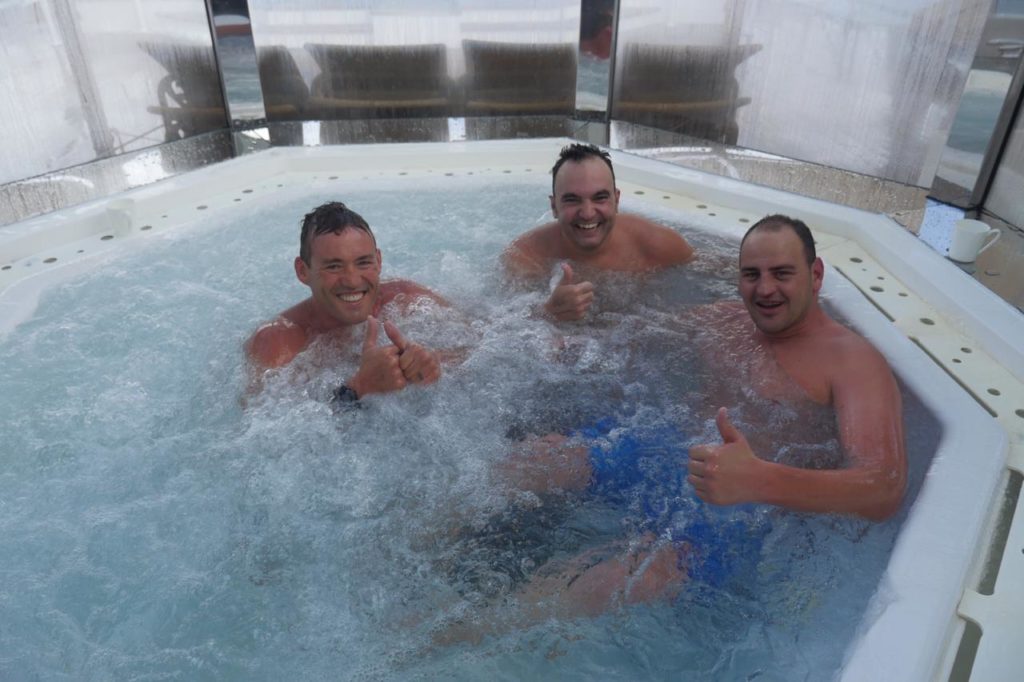 Recovery involved the quick accessing of the expedition ship’s sauna and jacuzzi area under the close supervision of Dr Gottschalk. Some swimmers’ core body temperature was measuring only 28 deg C in the recovery room after the swim.

Extensive travelling, 2 days in flight and 2 more on sea, to reach their destination and swim was no small feat. Crossing Drake Lake was a challenge in itself with waves 10m and higher and cutlery flying around in the dining room of the ship. 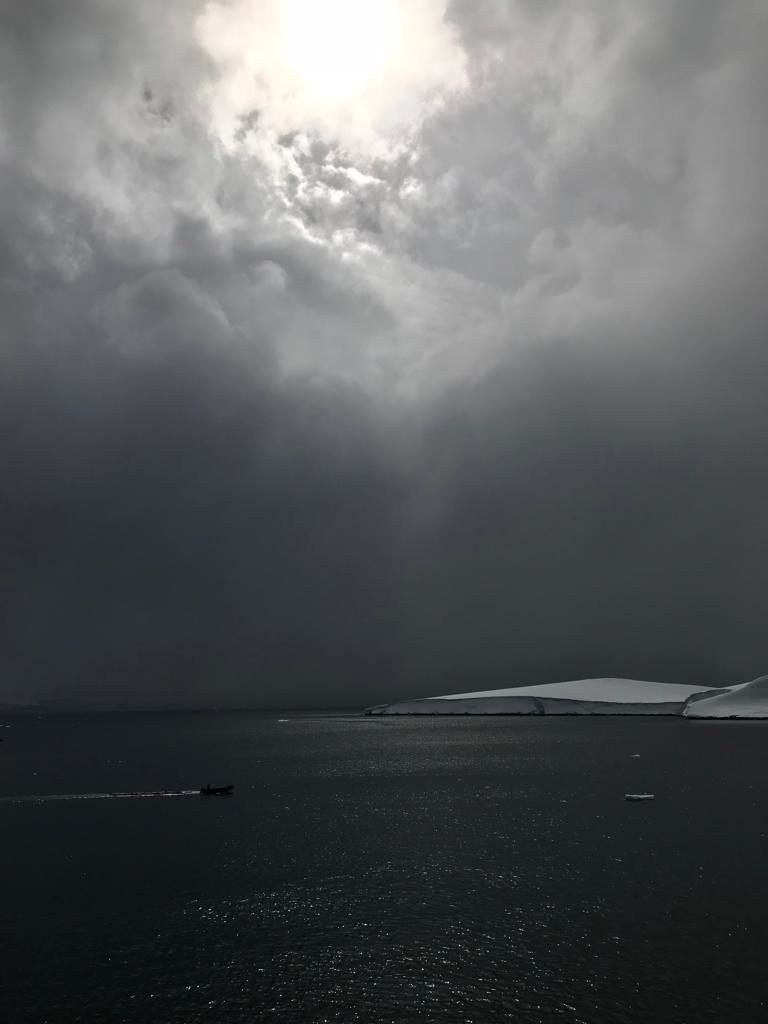 “There are concerns that ice swimming is way too dangerous for the average person but the individuals who are getting into ice swimming are anything but average”, observed Steven Munatones of World Open Water Swimming Association.

“From what I have seen the organizers and ice swimmers are as knowledgeable and experienced in the cold as they are responsible and safety-conscious. This sport attracts truly driven and unique individuals who are well-prepared physiologically and psychologically to handle swims up to 1000 meters – and longer – in the cold air and water conditions under 5°C. After a decade of ice swimming Barkai and his ice swimming colleagues around the world have learned a significant amount of how much the human body can acclimate to cold water and how best to implement the rewarming process. ”
http://dailynews.openwaterswimming.com/2018/11/rethinking-what- is-possible-in-ice.html. 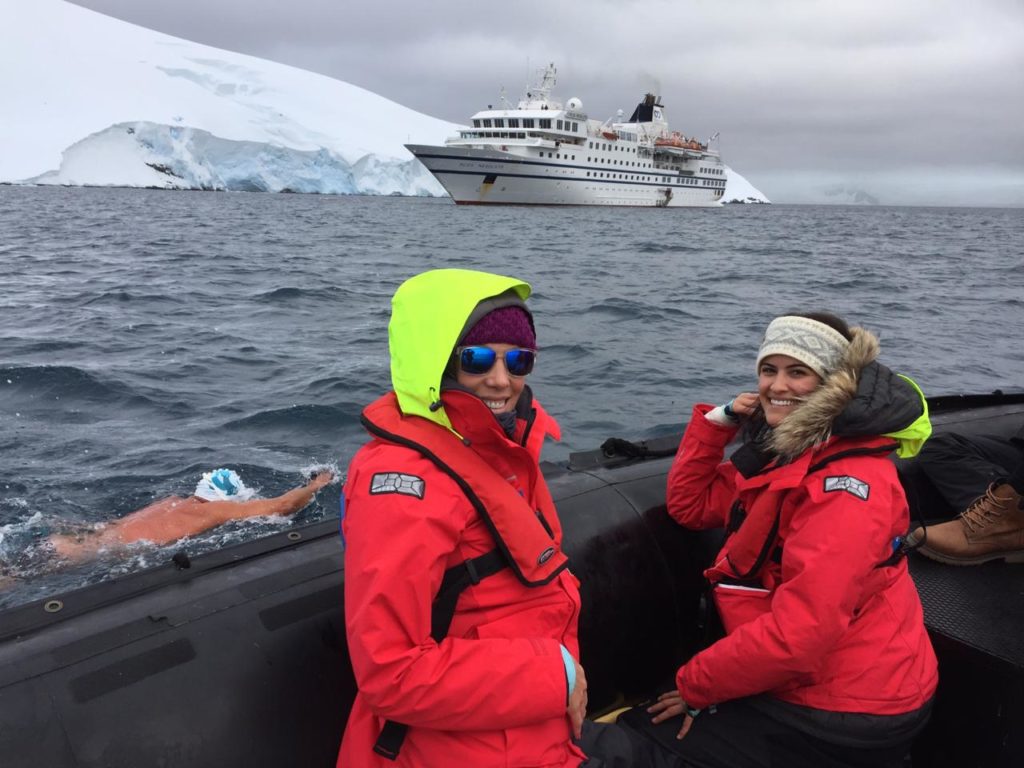 Others have swum in Antarctica waters before but it has never been an official event. Barkai, who has worked almost 2 years to put this major event together, applied International Ice Swimming Association (IISA) rules to make it official and will also apply for a Guinness World Record now that it is done.

Swimmer Jean Craven who represents the non-profit organisation Madswimmer decided to up his fundraising target from R50 000 to R500 000 for children’s charities. “Getting here was no small feat. Raising only a few rands will not justify the effort. We hope the swim will inspire others to do their part to make this world a better place and give under privileged children a chance to become the worthy citizens they deserve to be”. To view the charities and donate, visit www.madswimmer.com. Madswimmer has raised over R9-m over the years to support children.

Last night around 8pm SA time (3pm in Antarctica) swimmers kicked off to do the first official 1km ice swim at Port Lockroy, a natural harbour in front of the Antarctic Peninsula. They were going out in heats of 3 to 4 swimmers per heat.

Seven of the 14 swimmers have completed the swim successfully but currents and winds started to create havoc and boat management decided to pull up anchor to sail to the next possible swimming location, Mikkelson Bay, trusting weather will allow the rest of the participants to also get a chance to get this long-awaited dream swim done.

Watch this space for the final announcement…

Herewith a video clip of SA swimmer Samantha Whelpton completing her swim (her core measured 28 deg C in the recovery room after the swim!) as well as a few photos of last night’s happenings.

The team of global swimmers, led by South Africa, that embarked on the first ever official 1-km ice swim in Antarctica (entering as an event and not individual swimmers) managed to do a TEST swim. Up and until then the weather  had not been very hospitable and didn’t allow anyone to get off the cruise, never mind swim. Luckily elements subsided and water warmed up to 0 Deg C that enabled a test swim.

Herewith a few photos of the TEST-SWIM late yesterday. The official swim is scheduled for later today (Antarctica time 5 hours behind SA) – weather permitting. We might only receive the footage tomorrow. Watch this space…

Looking at the ice bergs, miserable weather and abandoned but beautiful land of ice, I was wondering if these ice swimmers in Speedos were real. I think they are robots – programmed to get the job done. It just can’t be real! 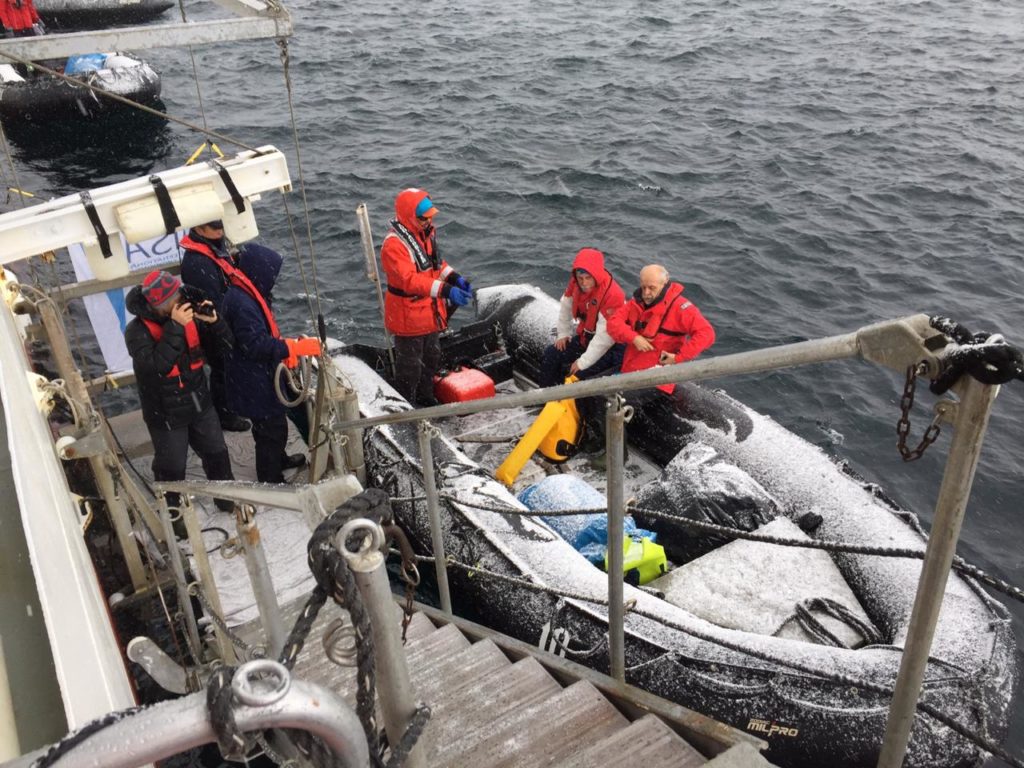 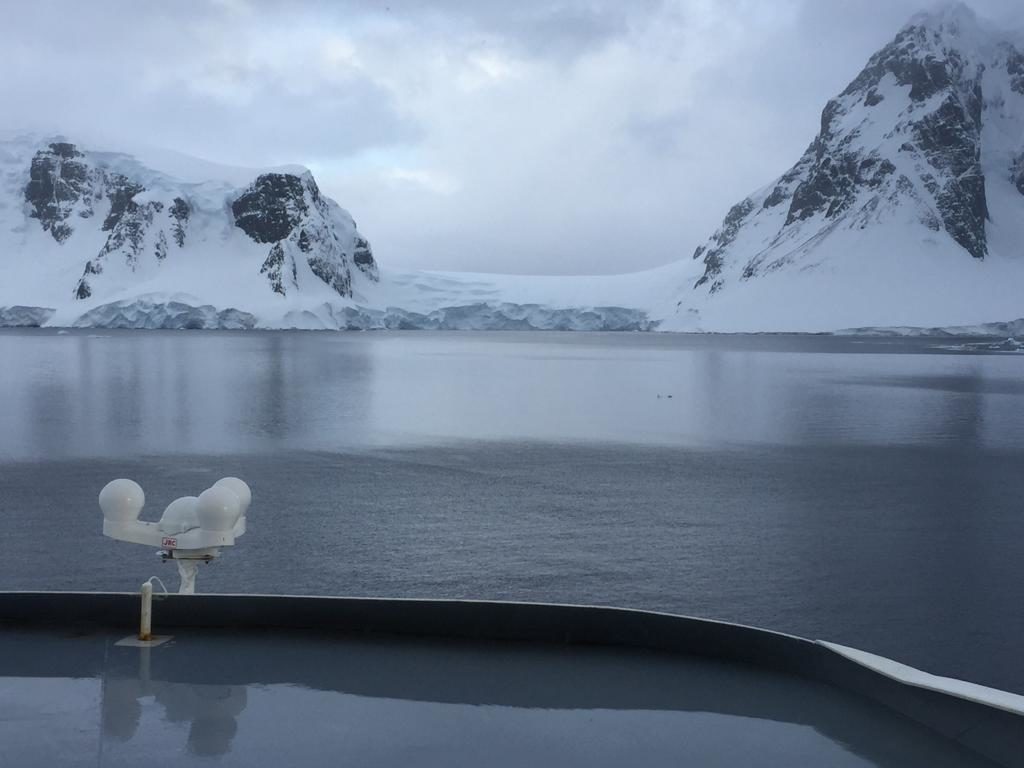 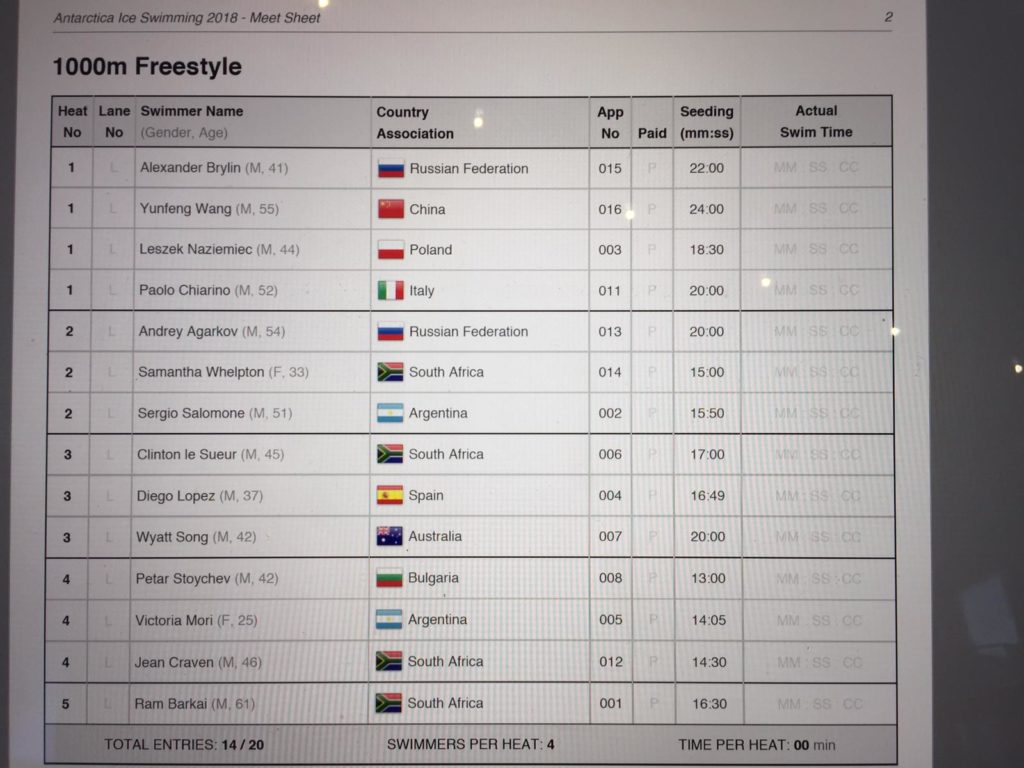 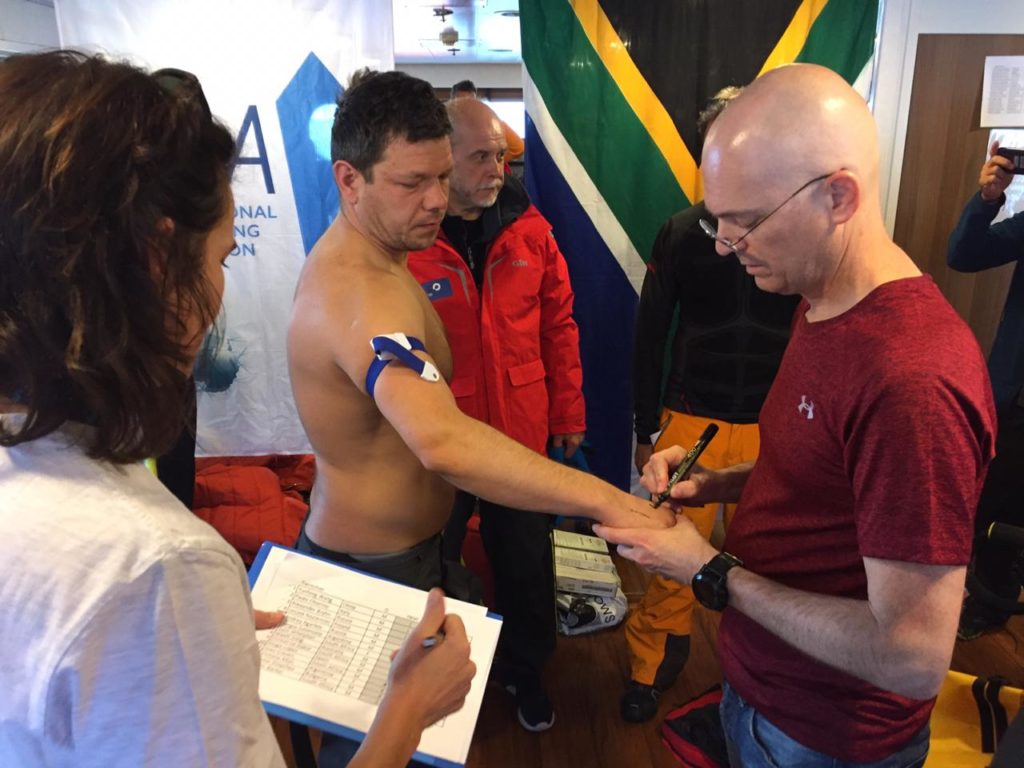 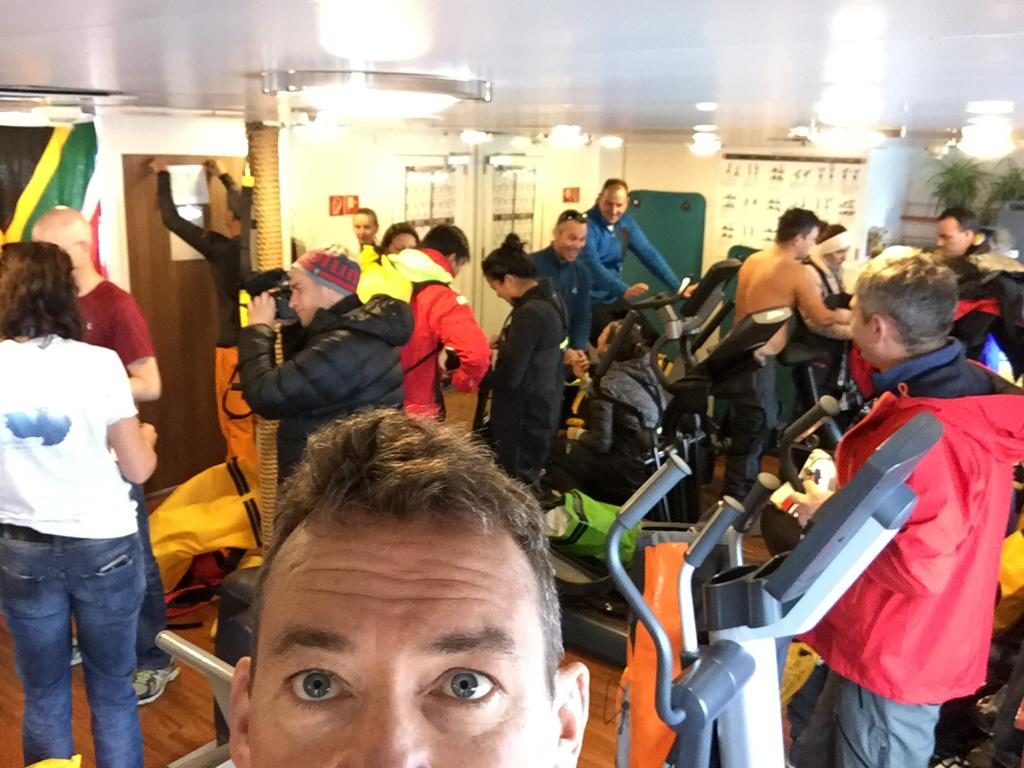